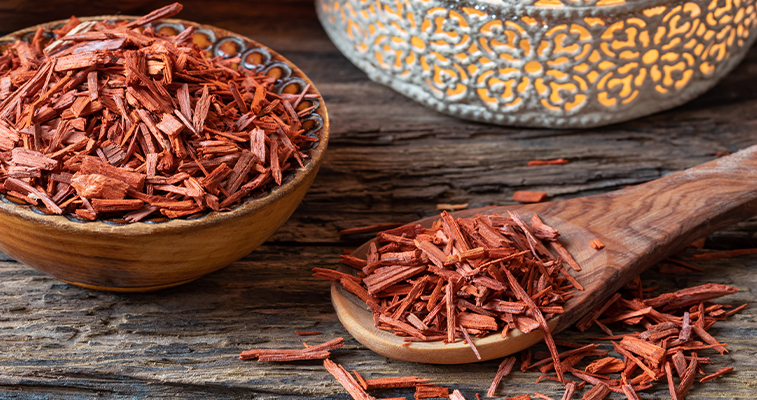 Sandalwood is an aromatic wood that is one of the most sought-after ingredients in the perfume industry.

Belonging to the botanical family Santalaceae, the genus Santalum contains sixteen different species, three of which are used in perfumery. From Santalum album which has rounded, creamy, milky notes, to Santalum spicatum with an earthier scent and Santalum austrocaledonicum with woody, velvety notes, this ingredient is versatile and invaluable to the perfume industry.

Santalum album is one of the most precious woods in the world and consequently is one of the most expensive ingredients in a perfumer’s palette. But where is this sandalwood sourced? Why is it so expensive? What are its applications? These are all questions we’re answering in today’s blog…

Where does Sandalwood grow?

Sandalwood used in perfumery is originally from Indonesia, India and Oceania with Santalum album originally growing wild across the state of Karnataka, India. In the present world of perfumery, Santalum album is grown and sourced from Australia and New Caledonia and these sources are now known as the modern industry standard of sandalwood.

A relatively small tree growing to 8-12m in height, Santalum album is a botanical hemi-parasite meaning its roots grow on those of another nearby plant in early development. Cajanus cajan is believed to be the best primary host forming a symbiotic relationship with the sandalwood tree. Cajanus cajan enables sandalwood to absorb water and nutrients from its sap to aid better growth. The heartwood of sandalwood, where its essential oil is extracted via steam distillation, varies from pale yellow to red depending on the chosen host plant.

Why is Sandalwood so expensive?

Despite perfumer’s adulation for sandalwood and its captivating, robust scent, over-exploitation of this natural ingredient has substantially influenced its quality and global resource, consequently influencing its price.

In India, Santulum album was over-harvested in the late 20th century putting this aromatic wood in danger of extinction. As a result, exportation bans were imposed by India, and Western Australia’s agriculture industry played a vital role in easing supply pressures.

By creating sustainable Santulum album plantations, Western Australia were able to give perfumers the choice to create fragrances using natural sandalwood with confidence in regular, sustainable supply, and consistent quality. As a result, this natural ingredient is no longer sourced from India in the modern world of perfumery, and instead, Australia is now one of the primary suppliers of Santulum album.

Also, it is important to consider that sandalwood is harvested in some of the most remote places around the world which makes it particularly costly to source and transport. It is pivotal for perfumers to remember that sustainable sourcing is crucial to their role; they should not only be concerned with sourcing the best ingredients, but also sourcing sustainable ingredients to keep people and planet in mind by exercising ethical practices.

What is Sandalwood used for?

Sandalwood has historically been used in South Asian spiritual traditions and religious rituals with sandalwood oil being applied to the forehead or burned as incense within places of worship. In India, sandalwood is believed to hold protective powers and is considered to aid meditation and tranquillity with an olfactory component alpha-santalol known to be effective in reducing stress and having soothing, relaxing properties.

As well as incense, the sandalwood fragrance is used in cosmetics, perfumes and soaps with sandalwood now being a familiar scent in a perfumer’s palette as a key ingredient in many perfumes from around the world. Providing a sensual yet sophisticated base note, sandalwood provides fragrances with warm, deep bottom notes which leave a lasting impression on the skin.

Is Sandalwood a feminine or masculine scent?

The principal components contributing to the olfactory impact of sandalwood oil are santalols. These free alcohols are crucial to the sandalwood scent with the oil needing to contain a minimum level of santalols to be classified as authentic according to the international standard.

Traditionally, sandalwood has been associated with more masculine fragrances in perfumery due to its smooth, woody aroma and earthy nature. Although more recently, sandalwood’s warm, creamy notes have been combined with floral notes such as iris, and even fruity notes to create more feminine fragrances. As a result, sandalwood has been used as a base note in many feminine perfumes including N°5 by Chanel where it enhances the perfume’s powdery notes (perfumesociety.org).

Sandalwood is a favoured ingredient for our expert perfumer, Ana Gomez: “It is a woody raw material with a strong milky/lactonic nuance, which provides a long duration to the fragrances. I love the combination of sandalwood and amber for my masculine creations, I think it gives so much power to the top notes and intensity. For the feminine fragrances, I like to combine sandalwood with other sweet notes, like vanilla, to add a touch of sweetness and femininity.”

Many well-known fragrances from around the world contain sandalwood which is blended with numerous fragrance notes, such as:

What is synthetic sandalwood in perfumery?

Due to the unique molecular structure of sandalwood, alpha-santalol and beta-santalol are principal components with the highest olfactory impact, responsible for sandalwood’s fragrance. Although over-harvesting of sandalwood trees means there is risk of endangering the Santalum album species in nature. Consequently, many synthetic sandalwood molecules have been developed and are often used to enhance the natural sandalwood scent:

The use of these substitutes in fragrance supports sustainability efforts to savour natural sandalwood resources and additionally, there are lower costs to using these alternatives. These eco-conscious ideals are imbedded into Ana Gomez’s values as she creates new fragrances:

“I always consider how sustainable raw materials are, meaning sometimes I use synthetic ingredients that imitate the smell of the natural sandalwood oil to get that woody-creamy effect. Sandalwood is an endangered species that we must protect, so I always think twice before using it and often choose to use synthetic versions. Our purchasing department is aware of how sustainable raw materials are, and when possible, we choose suppliers that guarantee sustainable cultivations.”

It is clear sandalwood is highly valued throughout the industry. Traditionally the beauty of sandalwood in perfumery has relied upon nature, with quality ensured by the environment, climate, and soil. It is now in our hands to ensure this rare tree can continue its legacy via natural resource protection and relying on synthetic alternatives. Want to learn more about ingredients in perfumery? Head to our blog to discover patchouli, amber, and more…