The enigma of scent: brain or nose?

Can you recognise hundreds of perfumes? When you enter a place, is how it smells the first thing you detect?

What most people understand by the word smell actually refers to thousands of molecules that activate tiny sensors in our nostrils.

To say that we smell with our noses is to oversimplify the matter: firstly, because our noses are merely the location of our olfactory receptors, and it is our brain that stores the information that tells us what it is we are smelling. Secondly, because our sense of taste also has a lot to do with this process. Together they are known as the chemical senses. Information about scents reaches our brain both through our nose and our mouth (vapours with scent molecules are pushed towards the nasal cavity by our tongues, and the olfactory epithelium is once again activated).

Focusing on our sense of smell, it is inside the nose that the “chemical transduction” occurs which turns the scent molecules we detect into electrical signals received by the brain.

Did you know that research into smell won a Nobel Prize in 2004?

It was not until the 90s that two American scientists made a great discovery which explained how it is possible that we can perceive chemical substances as smells. Biologists Richard Axel and Linda Buck won the 2004 Nobel Prize in Medicine for their findings regarding the sense of smell.

They discovered that around 3% of human genes (approximately 1000) contain information about smell. It is thanks to these genes that scent receptors develop in the membranes of the nose. The novel thing about their discovery was the finding that the receptors do not activate all together when they perceive a scent molecule, but rather different receptors activate reacting to different molecules. That is to say that a scent molecule is perceived only by the receptor programmed for that molecule, and only that receptor transmits the information to the brain. Molecules and receptors must fit together like a lock and key. Each combination is interpreted by the nervous system as a different smell. Once activated, they send the information to the olfactory bulb located in the brain, which receives the information, processes and stores it. 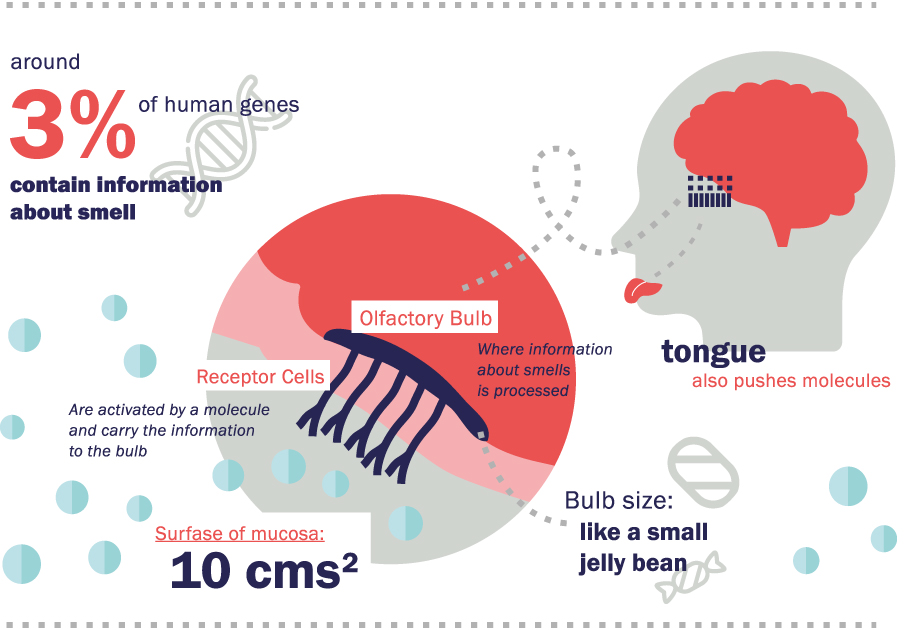 How many smells can we identify?

Humans’ sense of smell is passed down genetically and, over the course of evolution, it has diminished in comparison with other living beings. Dogs, for example, have forty times more brain surface dedicated to smelling. Humans have less because we have prioritised other brain functions, such as vision in colour, which evolution deemed more useful for our species’ way of life.

With regard to the number of smells people can detect, there is no scientific consensus; we may have to wait for a second Nobel Prize to resolve some remaining mysteries surrounding this sense. With no specific number, and bearing in mind the fact that the capacity to detect scent is as much an individual gift as having a good ear for music, it is true that you can train your sense of smell. Perfumers, for example, train their brains in order to widen the range of scents they can recognise, and the speed at which they can do so. The way to do this seems simple: it involves associating smells with memories or thoughts. However, the number of smells that could be memorised is arguably infinite. That is why the career of a perfumer is a long learning curve, involving continuous development, discovery and training.

Thanks to the way in which our brains process information from the receptors, the human memory can store the smells of thousands of combinations of scent molecules. Involuntarily, every time the correct molecules activate the combination of receptors that have perceived that smell before, our brains recognise that combination and we can be sent straight back to our classroom at school or to our grandparents’ homemade sweets… But our emotional connection to scents is another matter, and we will talk about that later…

We use cookies on this site to enhance your user experience. If you continue without changing your settings, we´ll assume that you are giving your consent for us to set cookies. View here our Cookies policy