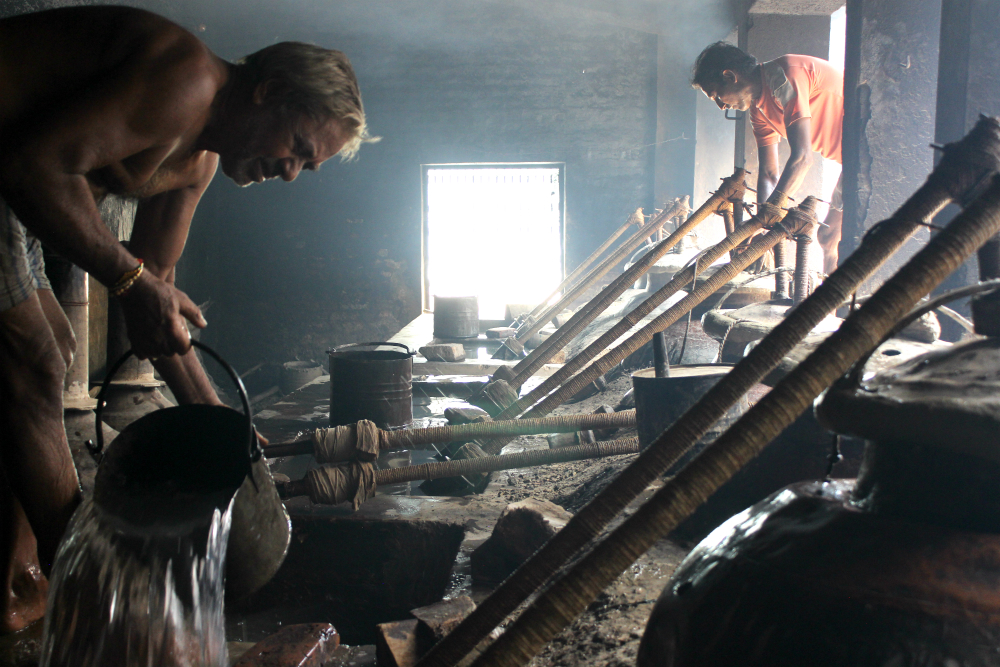 What follows is a report of the trip taken by Guillaume Audy, Corporate Communication manager at Iberchem Group, together with Nikesh Budhrani, Managing Director of Iberchem India, to the city of Kannauj in India.

India is a country rich in culture and traditions. I knew that if I were to dig into its past, I would soon discover something interesting to do with the world of fragrances.  And it took no more than a quick call to our regional manager, Mr Nikesh Budhani, to be told about the city of Kannauj, considered by many to be the Grasse of India.

A two-hour drive separates the city of Lucknow, where we were staying, from the town of Kannauj. The government had recently built a highway to connect the two cities, which made the journey pleasant and straightforward. On both sides of the road, green fields dotted with lush trees stretched out as far as the eye could see. Compared with the frenzy of New Delhi, where I had spent the previous week, the scenery unfolding before my eyes made me feel as if I were in another country. Even my colleagues, both Indians, were pleasantly surprised by the view.

The city of Kannauj

Kannauj is well known for being the perfume capital of India. Once a powerful kingdom, its origins can be traced back as far as the Bronze Age. It is located in the north of the country, in the state of Uttar Pradesh, and has around 85,000 inhabitants, about 4,000 of whom work in the attar industry.

Kannauj has been distilling flowers to make perfume for more than 400 years, since the time of the Mughal emperor Jahangir. There were once over 800 perfume distilleries in the region, but  nowadays, the number has fallen to barely 100 and continues to fall every year as the use of synthetic perfumes overtakes that of attars. 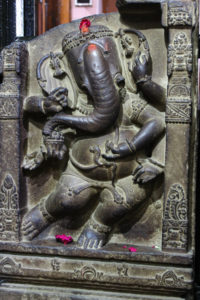 The office
When we arrived, we were greeted by brothers Prakhar and Pranjal Kapoor of M.L. Ramnarain Perfumers, a local manufacturer of essential oils and attars that has been in the industry for four generations. To shelter from the heat of this blazing August day, they first invited us to cool down in their city-centre office. As soon as I entered, I noticed that the room was packed to the rafters with paintings, awards, fragrance samples and artefacts, including a very rare carving of a dancing Ganesh. The doors had imposing dark-brown deodar pinewood mouldings dating from the last century, when the business was first established at this location. All of these touches made the strong heritage of the family almost palpable.

What is attar and how is it produced?

Attar (also called ‘ittar’ in Hindi) is a natural perfume oil made from natural ingredients like rose or even agarwood (as is the case for so-called gold attar). It is possible that the word ‘attar’, ‘ittar’ or ‘itra’ is a derivative of the Persian word ‘itir’, meaning ‘perfume’.

Attar is obtained from a traditional steam distillation process called ‘deg and bhapka’, which means ‘large pot and small pot’ and is performed by skilled workers called dighaas. First, the dighaas pour the main ingredient into the deg along with cold water, and then seal it using a special type of clay. Logs are placed under the deg and lit so that the mixture comes to the boil. Throughout the procedure, the dighaas must make sure that the temperature stays at a certain specific level and that the attar does not overheat or become contaminated.

After a while, the steam comes through a bamboo pipe, the ‘chonga’, passing from the ‘deg’ into the ‘bhapka’ (receiver). There, a layer of oil catches the evaporated aroma molecules. Sandalwood oil used to be used for this layer, but now its high price and rarity means that other oil-like substances are generally used instead.

The distillation process is then repeated several times, depending on the desired concentration of the final attar. The whole process can take up to 25 days.

Attars are generally more expensive than essential oils, as producing them takes time and expertise; one litre of pure rose oil attar can cost up to €15,000. The rising price of sandalwood oil is also a major reason for the high price of attars; the price for a litre of sandalwood oil has risen from 650 rupees in 1970 to 90,000 rupees today.

In India, only a few customers still buy attars; Kannauj’s major domestic client is now the chewing tobacco industry. As for customers outside India, most exports these days are to the Middle East (around 20%), where attars are highly valued and many customers can afford to buy them. 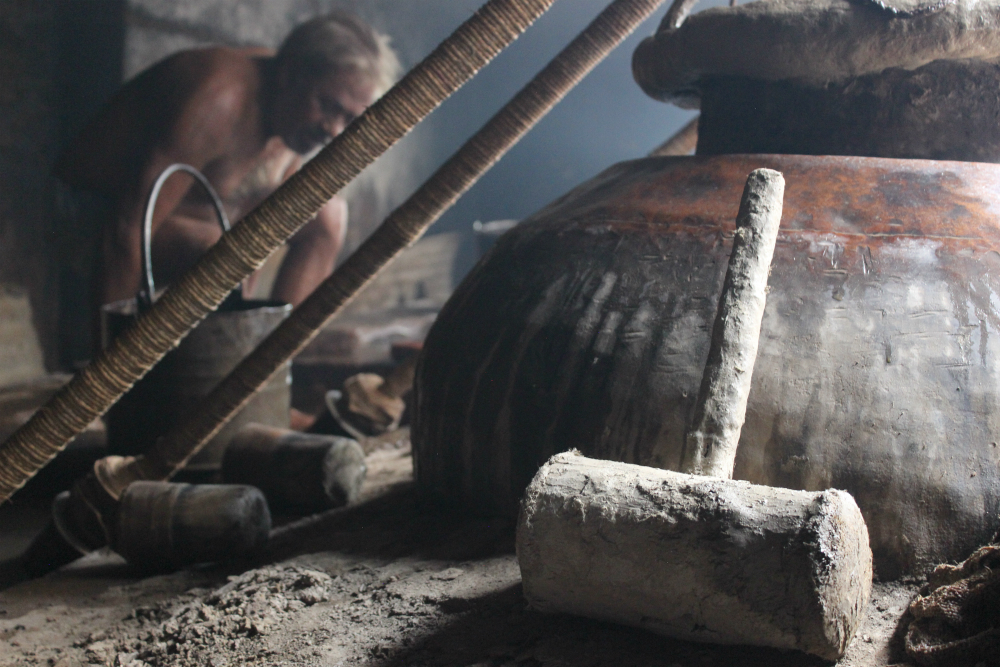 In total, the company owns five different production plants, with one only five-minute walk from the office. As we approached, the smell of smoke grew more and more intense. Children’s laughter could be heard not too far away – apparently, the factory is close to a primary school.

The once-plain façade of the building had been scarred with the passage of time. Two blue grilles acted as curtains on either side of the main door, which was crowned with a dark grey stain from the smoke constantly coming out of it.

Stepping through the door, we came into an open courtyard. In its centre, logs and other tools were scattered about randomly. Along the sides, in the shadows, stood a dozen degs of different sizes. For an instant, it felt as if we had travelled back in time. As unbearable as the heat was in the street, it was ten times worse inside. It was so hot that, for the first time, my camera flashed up a warning that it was overheating.  Nevertheless, what seemed unbearable to me didn’t seem to be affecting the workers there very much. One was casually slotting logs under the degs, while another was preparing some clay to seal them. A third was checking on the degs, making sure the distillation process was going smoothly. Of the 50 employees working for the company, 24 are located at this facility in the centre of Kannauj. 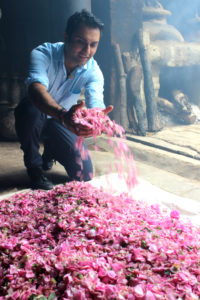 Nikesh Budhrani, Managing Director, Iberchem India
Doing my best to ignore the sweat running down my back, I spent around 20 minutes taking pictures of the place. The way the light was piercing the smoke gave the place a mysterious vibe, making it a pure delight for photography.

As I was about to leave, a man entered the room with a jute bag full of rose petals, ready to be distilled. The instant he threw the bag onto the ground and opened it, their colour and aroma spilled out. It seemed as if a rose had just burst into flower in this sepia-toned place.

A few more shots and it was time for us to head back to our hotel – our time-travelling adventure had come to an end.

Iberchem would like to thank M.L. Ramnarain Perfumers for welcoming us and for introducing us to the magical world of attars. Without their help, this article would not have been possible.